Australian road trains are a fascinating configuration. They are the behemoth, big rig  trucks and trailers which haul freight in the wild Australian Outback.

These trucks are literally the REAL BAD BOYS of trucks!

An Interview With a Road Train Truck Driver

The following is an interview with a trucker who runs the rugged Australian Outback,  and so generously volunteered his time, to tell me about these monster road trains.

You’ll learn just how different trucking is so different in Australia as compared to our North American trucking industry.

Thanks so very much to ‘Craig Johnson’, from Gippsland, Australia for his generosity in sharing his first hand knowledge about some of the famous and dangerous adventures of Aussie road train

What is An Australian Road Train?

Road trains are known to be the world’s longest trucks, used in heavy hauling trucking.

Because the Outback is very barren and huge, most freight travels by road and the Australian road trains are designed as the best way to move the freight.

These trains are huge long trucks, consisting of multiple trailers.

They are hooked up by what’s called converter dollies.

There are many forms of combinations, the most common being the three trailer or two trailer combination.

This type of setup isn’t allowed in North America, due to the length and weight. Why are road trains used in Australia?

On a normal road, IF there IS such a thing, special permits are needed to run a train. Roads in the Outback are mostly one lane roads. There are no freeways or super highways here.

The longest road train can be up to 53 metres in length and up to 80-120 tonnes in weight.

When the driver looks back in their mirror, well let’s just say, ‘it’s a long way to look back’!

From the driver’s cabin, Australian road trains are a crucial link in the Outback. They are the only possible way to get the freight through to small outback towns.

The Aboriginal communities rely totally on the road trains.

Very remote areas completely depend on these huge loads of goods, and it weren’t for the trains, it could be months in some places before the road train could get back to them, so a normal semi trailer load, would just not be enough. 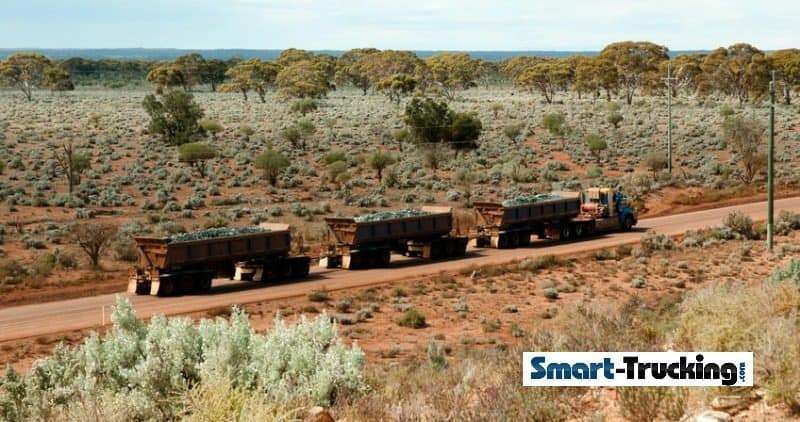 What Are the Dangers of Traveling By Truck Through Australia’s Outback?

The Outback is a very vast huge land mass.

It can fool a lot of tourists who look at a map of Australia and think it does not look very big and then they get themselves into all sorts of trouble out there, as they are not prepared.

Just recently, 2 tourists died after their car broke down and one tried to walk for help while the other stayed with the car.

But because they were not properly equipped, they soon ran out of water and the hot searing sun showed them no mercy and they perished.

They were not the first and I can tell you right now, they won’t be the last.  If ever you come to the Outback and plan a road trip, it’s always a good idea to ask the locals for any advice.

The Outback of Australia is a beautiful place but it can so quickly turn deadly too.

The Outback is huge and so the importance of  Australian road trains and the knowledge and skill of the drivers is so very important too.

Rugged Roads – Of course, there are many hazards of driving such a huge truck on roads that are in many cases just a track. There have been some improvements in roads and also the design of the modern road trains.

But the Outback can always present problems. Roads are often just a narrow slip of black tar and the tourist doesn’t seem to seem to know that it is them who must get out of the way and not the road train.

If the truck makes just one little slip off the edge of the road, especially when loaded with moving livestock, can spell big, big trouble.

Weather – The great Aussie sun can heat up the tar on the road very quickly.

It’s so hot here, that drivers can cook up some bacon and eggs on the step of their big rig! Having plenty of supplies is crucial out there of course.

When people think of the Outback, they think hot and dry, but an even bigger problem is the wet season.

Drivers must be aware of weather patterns along their journey. The weather can ‘turn’ very quickly and when it does, and there’s rain, the roads turn to mud.

A trucker can get caught for weeks out there, stuck in the mud.

Over the years, some trucks who took the risk have ended up, stuck for months.

This also explains another reason for the importance of the road train. The rail would have no hope at all out there.

Related > Trucking in Australia:  This is the Way They Roll Down Under

Terrain– Jump ups are also a big concern at times. Jump ups are where a truck has to come down onto a river or creek bed crossing and then needs good traction to get up the other side.

The truck needs a good run up the hill, as they have so much weight on behind. Sometimes it looks just too risky.

You can always unhook and take one trailer at a time, but this does take a lot of time.

You then have to re-hook the trailers up again. So a good lot of planning must go into a trip.

Bush Fires – Another big hazard out there are the Australian bush fires. These bush fires can and have cost many lives.

A couple of years ago in Western Australia, we lost a few road train drivers as they were all given the ‘all clear’ to pass on through by the authorities.

But as they got halfway through, they became trapped and there was no way forward and no way back, and just no way at all to  turn around the huge road trains.

They lost their lives in the fires. Just innocent mistakes out there and the results can be deadly.

The sad part is most of the fires are set deliberately by arsonists.

With all those wheels rolling and rumbling underneath the truck, on the rugged terrain,  the trucker in Australia needs to get used to changing the tires.

Boy… that is very hard work in itself, as you could well imagine in the blazing heat!

Animals – The animals, here in the Outback, roam freely and graze on the side of the road.

They are big animals and there’s always at least one that will stand in front of the truck.

If you try and stop a road train quickly… it’s not going to happen very fast.

That’s why the big bullbars you see on the front of Aussie trucks are so important. They keep the animal from crushing the grill and rad of the truck.

Road trains haul anything and everything.

When people think of ‘road trains’, they automatically think of livestock and trailers full of cattle. But they actually haul everything. There are fuel tankers, and those which haul machinery, cattle, sheep.

They also haul tons and tons of product out of the big mines in their ‘side tippers’. The mighty road trains haul everything you can think of!

What Happens If a Rig Breaks Down in a Deserted Area?

In these modern times, all the big road trains have fantastic communication set ups in their trucks.

If  a truck breaks down and the trucker can’t fix the problem, he can radio ahead for help. It’s really vital that the trucker let the receiver know when he’s departing on a trip and an expected time of arrival.

In the old days of road trains, when there was no communication with the truck, the trucker pretty much had to be a ‘bush mechanic‘ and him/herself  out of trouble as best as they could!

True Icons of the Outback

To sum up, the Australian road trains are iconic features in the Outback, in this beautiful land of ours.

I couldn’t imagine how it would be here in Australia, if it were not for the road trains and their drivers.

Things have improved for this system and their Australian drivers over the past number of years.  The trucks have lots more horsepower, which really makes the journey a little easier.

Overall though, it’s a dangerous lifestyle.

You can certainly bet at any given time,  there will be a road train driver out there somewhere, trying his or her guts out, and fighting to get the freight through.

How is trucking in Australia different than in North America?

Being a truck driver in Australia, driving a Road Train truck, is not an easy task. These tractor trailer units consist of several trailers, pulled by a heavy duty big rig. They travel through all sorts of rugged terrain, where there are no services or repair shops. Many drivers are expected to get their own trucks up and rolling or unstuck should they find themselves in an unfortunate situation. The hazards encountered in the Australian Outback are fires, mud holes, animals, intense heat and being stranded if broken down.

What You Need to Know About CDL Truck Driving School Cost

How the Physician Shortage Will Impact Jobs

The Importance of Doing a Thorough Pre and Post Trip Inspection

all client do not pay any other client / call for jobs…. do not pay .. not a responsible for website https://freejob.info