The SPAC bubble didn’t burst during the first quarter of 2021.

Of the 407(!) initial public offerings in U.S. markets between Jan. 1 and March 31, 298 (73.2%) involved blank check or special-purpose acquisition companies, according to a new analysis from Audit Analytics.

Leading the way among the 14 IPOs with proceeds greater than or equal to $1 billion in Q1 was Roblox Corp. (if you have an elementary school-aged or middle school-aged child, you’ve heard of this company and its games before), which raised more than $8.95 billion. However, Roblox went public through a direct listing, a less-expensive option in which no new shares are created and only existing, outstanding shares are sold with no underwriters involved.

Deloitte & Touche scored the Roblox audit, according to Audit Analytics. BUT of the 407 IPOs in Q1, the Big 4 audited only 81 of them, or 19.9% of the market. Because SPACs were still all the rage in Q1, that meant big business for public accounting firms that specialize in auditing those types of deals, specifically Marcum and Withum.

When it comes to blank check initial public offerings (IPOs), two firms dominate the market: Withum and Marcum. Together, these two firms account for 90.2% of all blank check IPOs from January 1, 2019 to September 30, 2020, with 156 companies raising over $47.7 billion.

Only two Big Four firms audited a blank check company at the time of IPO during this period; KPMG, with three clients, and PwC, with one.

During that period, Withum audited 89 SPACs and Marcum 68. In third was Grant Thornton with a grand total of five.

Both firms stayed real busy in Q1, as well, as Audit Analytics noted in its latest analysis:

Among all types of IPOs, Marcum led with 148 IPO clients, the most for all firms in Q1 2021. In terms of proceeds, Withum’s 138 IPO clients brought in over $43.3 billion, the highest amount raised this quarter. Worth noting, all of Withum’s clients were blank check companies. Marcum followed with a total of $39.1 billion from their 148 IPO clients.

Here’s an IPO audit scorecard for Q1 via Audit Analytics: 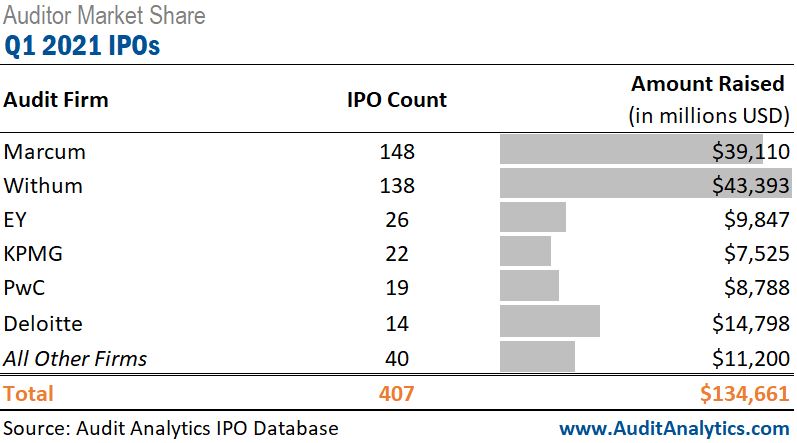 Now if you extract SPACs from the total IPOs audited, the Big 4 leads in auditor market share with 72 of the remaining 109 IPOs, or 66.1% of the market.

According to Audit Analytics:

EY led with 25 initial public offering clients – the most for all firms in Q1 – followed by PwC with 18 IPO clients. Deloitte held the top spot in terms of gross proceeds with 14 IPO clients raising over $14.7 billion.

With the SEC trying to crack down on SPACs, will the bubble finally burst in Q2? Barron’s reported yesterday:

In April, only 13 SPACs listed their shares, valued at $3 billion. This is a huge drop from the 109 blank-check companies that raised $35.4 billion in March, Dealogic said.

Withum and Marcum are definitely hoping for the SPAC craze to continue.

Have something to add to this story? Give us a shout by email, Twitter, or text/call the tipline at 202-505-8885. As always, all tips are anonymous.

Opinion: It's the AICPA's Own Fault No One Wants to Be a CPA Anymore

all client do not pay any other client / call for jobs…. do not pay .. not a responsible for website https://freejob.info